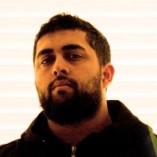 Asif Choudhury's Lyrics, Songs, Videos & Albums:
Total 1 Lyrics and videos on this site.
Asif Choudhury's Naats and Nasheeds:
Total 1 naats and nasheeds on this site.
Asif Choudhury's Official Website:
http://www.IslamicRhythms.com/artists.html
Asif Choudhury's Biography:
Asif Choudhury is an accomplished artist who combines traditional nasheeds with other genres.Asif Choudhury, born in March 1980 is the eldest of four children of a devout Muslim family of Bengali origin in London.He grew up and studied in London, graduating with a LL.B Law degree.A natural writer, he started writing Nasheeds at the age of 21 after feeling the need to express issues affecting himself and the Muslim Ummah. He feels that utilising Nasheeds is a captivating method to deliver a positive Islamic message to a widespread range of people:“My objective in writing Nasheeds is to promote Islam in such a way that attracts and reaches a wide audience, including the youth, who are the next generation to uphold the flag of Islam and the preservation of this Deen depends on them.”Asif Choudhury chooses to go by the name 'Slave of Allah' in order for it to be a reminder for the purpose of being in this world and the reason why all of humanity has been created: For the worship of Allah.Part of the inspiration for Asif Choudhury in his nasheeds comes from the reflection upon the youth at the time of the Prophet Muhammad (Peace be upon him). Asif Choudhury is involved in a lot of youth work in the community and he feels that the youth living at this time and age can do a lot better to emulate youngsters such as Ali(RA), Hassan and Hussain (RA), Mus’ab bin Umair (RA).Writing nasheeds and poems from the age the of 21 the 29 year old artist from East London writes his own lyrics but also uses traditional nasheeds and blends it with his very own style. With his second album “You Are Not Alone” Asif hopes to reach to a wider audience with his heart felt lyrics. The album consists of 18 tracks in English, Urdu, Arabic and Bengali