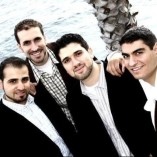 Noor's Lyrics, Songs, Videos & Albums:
Total 4 Lyrics and videos on this site.
Noor's Naats and Nasheeds:
Total 4 naats and nasheeds on this site.
Noor's Official Website:
http://www.noorification.com
Noor's Biography:
Noor's journey began over eight years ago when four friends were asked to perform at the opening fundraiser for an Islamic school in Riverside, California. Drawing their inspiration from well known munshids such as Abul Jood and Imad Rami, this group of friends began meeting once a month to practice songs and technique. As the number of performance requests began to increase, it became clear that the community was looking for a professional source of halal entertainment. In their first foray outside the realm of traditional nasheed, Noor purchased an electronic keyboard to add a modern flavor to the lyrics they performed from old books of poetry. At the time, traditional nasheed cappella-based with light percussions was appealing mainly to first generation immigrants. The group's new sound began to attract attention from younger listeners, filling the performance halls with both young and old. With a high-quality sound system and enhanced percussions, Noor began to offer their services at weddings and Islamic conferences, expanding their reach to performances across the United States. Noor has shared the stage with internationally known artists such as Ustadh Muhammad Abu Ratib and Sami Yusuf. These artists and others have helped make traditional nasheed mainstream by producing high quality songs with classic, wholesome lyrics and music. Noor, alongside these pioneers of modern nasheed, aims to offer Muslims around the world a hip Islamic alternative to standard commercialized music with the release of their first album, All for You.