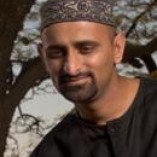 Zain Bhikha's Lyrics, Songs, Videos & Albums:
Total 39 Lyrics and videos on this site.
Zain Bhikha's Naats and Nasheeds:
Total 39 naats and nasheeds on this site.
Zain Bhikha's Official Website:
http://www.ZainBhikha.com
Zain Bhikha's Biography:
Zain Bhikha was born in 1974 in Pretoria, South Africa to parents Rashid and Mariam Bhikha. The only son, with three sisters, Zain showed a keen interest, from a young age in entertaining his friends and family with his beautiful singing. Zain was not aware of his full potential until 1994 when he won a singing competition on Radio 702, a local radio station. A simple song which he recorded on his home karaoke system brought him out tops among mostly professional participants. After this great accomplishment, he seriously considered recording an album. This consideration was put into action after he was approached by a local Muslim School who asked him to write and record their school anthem. Zain took it a step further and composed a full album, entitled “A Way of Life”. This was a compilation of basic Acapella Islamic songs, mostly in English covering the various tenets of Faith. The album, which was the beginning of greater things, only took Zain two weeks to complete. Outlandish, Native Deen, Sami Yusuf, Khalid Belhrouzhi, Imad Rami, Khaleel Mohamed and not forgetting his mentor, Yusuf Islam. Zain’s songs are mainly self written or adapted from poems and traditional Arabic songs. His songs are driven by emotion and the need to reassure people that turning and submitting to Almighty God is the answer of hope and the core for our everyday questions and confusion. Many of his songs represent different times in his life when he is learning and remembering how necessary Allah’s presence is. Zain’s songs provide young and old with an alternative to the modern music which often carries a destructive message. His music promotes spiritual contemplation and encourages every person to be proud of their faith, who they are and to work towards a better world. Zain confidently adds that much of his support has come from his parents and family over the years. He now lives with his wife, Zaheera and four children in Dubai, United Arab Emirates.

5. Allah Made Everything Lyrics - Zain Bhikha

7. Although I Never Saw His Face Lyrics - Zain Bhikha

19. Give Thanks To Allah Lyrics - Zain Bhikha