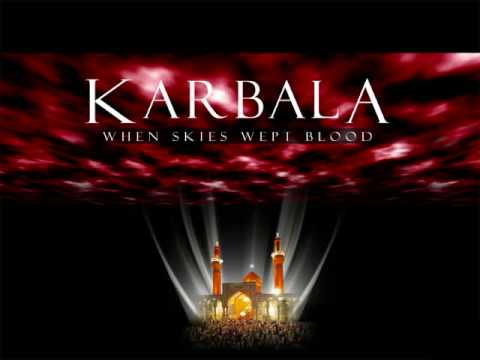 By: Voices Of Passion

Dragged from Karbala to Kufa, and then to Shaam
O Zainab, O Zainab

1
When you counted up the children in the dark desperate night
Sakina where are you? Where are you Sakina?
Sakina was clinging to her martyred father’s chest x2
A body so trampled upon, and covered with arrows
O Zainab, O Zainab…

2
When the sun rose on the morning of 11th Muharram
It was reluctant to cast its rays upon the scene
The brutal treatment of the women and the children x2
With chains around their necks and wrists and rope on their feet
O Zainab, O Zainab…

3
No burial for the menfolk who had been sacrificed
Their bodies had been trampled as they lay on the plains
No chaddar on the ladies as they were dragged away x2
A cradle lying empty on the sands of Karbala
O Zainab, O Zainab…

4
The heads of the martyrs were placed upon a row of spears
The children and the women were then dragged along in chains
Imam was ill but he was beaten all along the way x2
The ropes biting into their flesh and leaving them with scars
O Zainab, O Zainab…

5
When Zainab and Kulthoom saw the walls of Kufa
They remembered times that they’d spent there with their father
Who would have thought the family of Muhammad x2
Would be paraded in Kufa, in sorrow and such grief
O Zainab, O Zainab…

6
In Damascus they were marched in the blazing open sun,
Blood oozing from the lash wounds and the journey’s toils and trials
The townsfolk wondered who they were and gave them dates to eat x2
The people did not recognise they are of Muhammad
O Zainab, O Zainab…

4 thoughts on “Dragged from Karbala”